67 replies to this topic 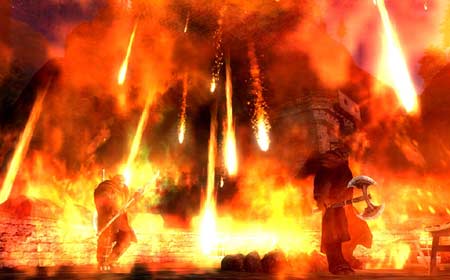 The end has come. Columns of fire rain from the sky, or spurt from the ground. The world is charred and blackened. Demons run rampant. The only salvation; an armada of colossal creatures gathering around the edges of the country; with ferries visibly moving survivors and refugees upwards to safety.

You have been making your way towards the closest visible concentration of these safety platforms, a stream of them steadily flowing between a colossal creature and the scorched coast. As you crest the tallest mountain, however, it hits you; a veritable sea of hellspawn and monsters between you and your rescuers. It would be impossible to wade through them and reach sanctuary alive. However, a force of strange figures, armored and cloaked, is pushing them from the other side - gradually making their way towards you.

Nearby, however, lies a good base of operations; a sturdy building you can hole up in. You have no idea how long the fleet of colossal creatures will remain, but the rescuing force is gradually making its way towards your position. More and more citizens are gathering at your position each hour, forced by circumstance and in the same position you are.

During the day, the massed forces are locked in savage combat against the foreigners from the sky. During the night, you've seen their forces split, driven into some mad rage - and giving the defenders a chance to push forward towards you, though the remainder demons will likely set their eyes on your position. Given the patterns of the attacks, you are able to observe that the more people are outside and unguarded, the greater the hellspawn's nightly assault - but if all of you remain inside the building, it will likely be razed. If a small protecting force can hold off the demons long enough, and withstand the barrage until your mysterious rescuers arrive, then you may yet survive the country's death...

A prequel (or a Survival Mode) of sorts to my long-running D&D campaign Flock, in which a small group of survivors must outlast the waves of diabolical attackers in the final days of a Martyrial country's evacuation. Primarily combat-based.

GAME 2: [TAKING VOTES ON NEXT COUNTRY]

CONFIRMED PLAYERS: Please list your 3 refugees below, with links to their sheets and/or wiki pages.

Skype spectators welcome. Be prepared for a lot of message notifications, though.

Spoiler
Vote for next round: Ardenheim, starting level 6

Sure. Something like this would be able to sustain more players than a full-blown campaign.

Review the lore - the wiki link in the intro post should provide most general info on Vanius, and if you need further information, feel free to ask - and get back to me when you have 3 characters, each at 3rd level. I'll review 'em, and we'll get you in the Skype conversation.

Most common Vanian races are given in the page breakdown, but you can choose as you please, given that other countries are evacuating through the area too. Also available on request: stats for the Durahan/Aosith (info also in the intropost links), if you want one of your characters to be an advance guard from the Flockborn forces. Steve, the shadowcaster. Possibly less than useless in a fight.

Sergeant Katherine Bright, the sole survivor of her squad. Slightly better than Steve at not ruining everything forever.

And 'Greg', engine of destruction made flesh. Becomes exponentially more terrifying as he approaches death.

Anthler Leeds, fist-fighter of the forest, struggling with the ghosts of his past.  Reaches a point of sheer fury where others unable to tell whether he's completely insane or completely in control.

Dynami Alora, cleric of the Unbreaking Chain, and a competent bowfighter.  Spreads tough love, emphasis on the love.

Aaand finally Emi 'Hanabi' Asahina, the 'exotic dancer' of the Carnivale, and some weird hybrid of warlock and ninja who makes herself dangerous by jumping from shadow to shadow.

1. Sophie Crafer: A citizen of Dalven with unusual priorities. Known for questioning hapless souls around her. Codename--SOCRATES: POLICEWOMAN. Wiki page.
2. XT: A warforged who bears oddly light body plate, with many mechanisms exposed. Turns caustic when his reasoning is challenged. Codename--THE DECONSTRUCTED. Wiki page.
3. Kaela Zhadi: A nomad from an arid climate whose flying carpet has been ruined by flame. She paints with the colors of the wind. Codename--JINN. Wiki page to come at a later date.

Are there any certain books that are not allowed or are they all allowed?

Generally anything's okay. Link your sources, and if I gatta problem I'll tell you.

il get the name of the book for the race of this one in a few days, cant remember the name, iv used the race before tho and its from a wizards of the cost book

il get the name of the book for the race of this one in a few days, cant remember the name, iv used the race before tho and its from a wizards of the cost book

XRunesmaster there is a button called edit that is in the bottom right of your post after you make it. Try not to do double/triple consecutive posts, it's against rules.

...Can you roleplay? For outsiders, I may have to administer an RP/literacy test...

Seconded. I'm also interested in knowing how the ANTHROPOMORPHIC ELEPHANT barbarian has 108 HP at 3rd level.

I think adherence to the fundamental rules of D&D would be really good. Just a useful piece of advice.

sorry, first 2 posts didnt register at first and about the HP take a look at the hit dice -.- plus its a barbarian = high health

This topic has been visited by 26 user(s)